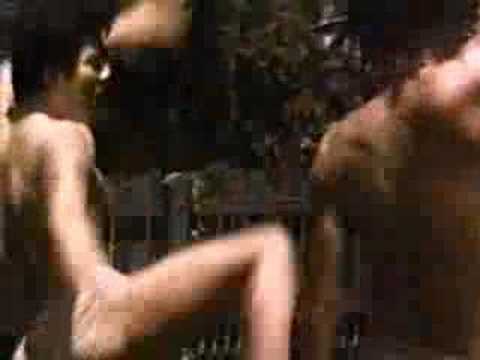 Bruce Lee was more famous than many retro martial arts actors could ever hope to be, which is why, when he passed away in 1973, so many imitators were lining up, ready to cash in on his success. That’s also the reason so many studios chose to encourage imitation-Bruce Less films, and soon, small companies were pumping out fake Bruce movies all over the world. There’s a massive list of actors who ‘became’ Bruce Lee, by changing their names to various versions of Bruce Lee, –here are just a few Lee impersonators:

And one of the most famous actors of all time, originally hired to be a Bruce Lee impersonator:

Yep, originally, Jackie Chan was hired by studios to imitate Bruce Lee, and it wasn’t until later, when he began accepting roles in comedy films, that he was able to establish his own screen presence and style.Some of the more well-known Brucesploitation films are:

The trend in Brucesploitation was ended almost single-handedly, by Jackie Chan, who managed to shake off Bruce’s choke hold from the grave, on Kung Fu cinema. Jackie brought in Kung Fu comedy, as Bruce’s serious, ass-kicking stuff went flying out the door. Though there are still a few serious kung fu movies surfacing now and then, the Brucesploitation era has come to an end.
Sign In or Register to comment.
Powered by Vanilla