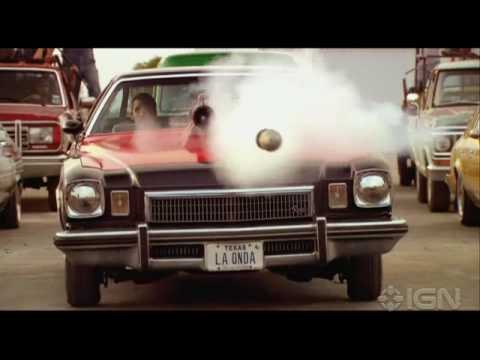 In true grindhouse fashion Machete graces us with an intense opening action sequence, the tension obvious when we see Danny Trejo (Machete) driving at high speeds across the Mexican landscape disobeying orders. The bullets fly and the body count begins almost immediately, this of course would not be as impressive as one might believe, until you see the very naked woman, a flamethrower, and believe it or not Steven Seagal as a villain!

From there this movie only proceeds to get better, Robert Rodriguez has certainly created another film that will wind up a cult classic. With all-star acting, action that doesn’t quit, and a high level of humour, Machete will keep you entertained from opening to closing credits. With the right amount of gore, some Michelle Rodriguez side-boob, more than one appearance of Lindsay Lohan’s tits, a doobie smoking priest played by Cheech Marin, and Robert DeNiro playing a corrupt senator, this movie does not fail to deliver everything a Grindhouse fan could ask for. Even if you are not a fan of the genre, I highly recommend this one.