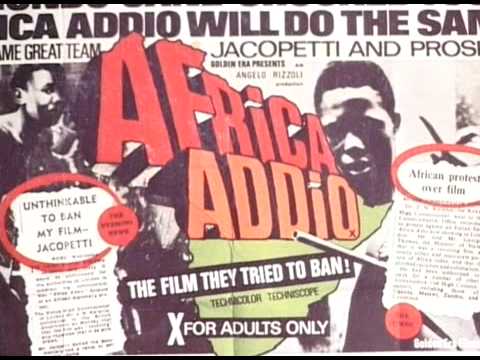 A mondo film strives to be a real documentary, but doesn’t quite make it, –generally because the topics covered by the film are just too taboo. They’re actually a bit more common than you think; I watched one by accident with my neighbor that covered all the horrible things people did to animals to eat them, and of course, all the bizarre things people ate as delicacies. You know, like bugs, foie gras, and all kinds of nastiness. Generally though, mondo films cover topics like violence and sex, although there are several animal cruelty style mondo-films that circulate, using the same old stock footage as well.

‘Shockumentary’ is being used more often in reference to mondo films, though many of the film’s footage comes from either re-used stock footage, or staged scenes. Although there are probably about a million other horrifying things these films could cover, –after Faces of Death was released, aspiring filmmakers saw an advantage in portraying the dead and dying: people were morbid assholes, and they’d buy films that were banned in other countries. So more mondo films about death, and executions, etc., have been consistently surfacing over the last four decades.

Some of the most popular mondo films are:

Mondo Cane, 1963 – An Italian film directed by prolific mondo film directors Paolo Cavara, Franco Prosperi, and Gualtiero Jacopetti. The film’s English title is ‘A Dog’s World’. The film centers around different cultural rituals, shot around the world, intended to shock Western audiences. However, many of the scenes have been manipulated or staged.

Faces of Death, 1978 – Almost everyone has been subjected to Faces of Death, at some point. It was recently released on DVD, limited to the U.S., since it’s been banned in over 50 countries, including Australia, Norway, Finland, New Zealand, and the United Kingdom. Many of the scenes are fake, but some of them are real, including that old timey favorite, seal-bashing.

Mondo Topless, 1966 – Guess what this movie is about? It was directed by Russ Meyer, who went on to direct the classic roughie “Faster Pussycat! Kill! Kill!” Mondo Topless is pseudo-documentary that focuses on the sex industry in 60′s San Francisco, before inevitably going into topless bars, where topless women dance around and give all the raunchy details about their personal lives.
Sign In or Register to comment.
Powered by Vanilla